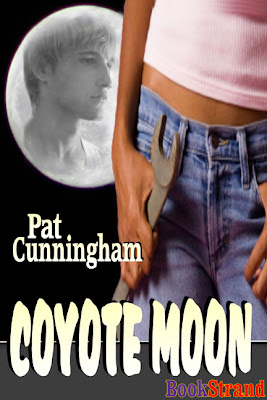 July 7, 2009, night of the full moon and a lunar eclipse. Yep, definitely a lucky omen for Pat Cunningham’s COYOTE MOON. Her first romance shapeshifter romance releases today!
Pat is my American Title IV buddy, so I thought I'd post a blurb and an excerpt for her here.

It's that time of the month -- the full moon -- when Willy Alvarez's moods go wonky and her dreams fill up with wolves. A time for hungers she doesn't dare fulfill because they lead to violence. She's resigned herself to a manless life, then Cody Gray arrives.

Cody is cute, funny, charming, and a werecoyote. His nose knows what Willy doesn't: she's half werewolf. He's convinced this repressed half-human she-wolf is his perfect mate. Now he just has to convince her. And quick, because her long-lost pack has learned about her existence, and they've come to town to claim her...

Cody sighed carefully, in and out. She wasn’t really in a state to hear this, but… “Willy, listen up. We’re out of time, so I gotta be blunt. You’re a werewolf.”
She stiffened in his arms. “Excuse me?”
“You heard me. Definite wolf. Not all the way, though, just half. From what I’m seeing and smelling, I’d say the wolf’s stronger than the human.”
She lifted her head and stared at him. His eyes were inches from hers, and utterly sincere. “You’re serious.”
“‘Fraid so. You almost shifted tonight, that’s what happened to you. The wolf and the ape are all mixed up and your body can’t make up its mind. I’m betting once you switch all the way, everything’ll sort itself out.”
“Switch? You mean, into a wolf?” Good God, this must be loonie night, and here she was stuck out in the middle of nowhere with a naked one. “You’ve got to be kidding.”
“Wish I could say yes, but you’re showing all the signs. You’re a wolf, and the sooner you own up to that—Hey, where you going?”
“Home.” Willy marched past him, eyes carefully averted, in the direction she figured Coopersburg must lie. The panic had run its course; her brain operated coolly again, all unwanted thoughts and emotions carefully suppressed. Okay, not all, but distance from Cody would take care of that. And maybe by the time she got there, she’d have figured out a way to deal with Beth that didn’t involve homicide. “Werewolf, my ass.”
In the blink of an eye Cody shot ahead of her and planted himself in her path. “I can see you’ve gotten good at this, but you can’t keep running forever. Face facts, darlin’. You’re a wolf, pure and simple, and you better accept it, or what happened tonight’ll happen again. Next time you might kill somebody.”
Like she hadn’t thought of that. Quick, distract herself. She waved her arm at the sky. “Explain why I’m human while a full moon’s out.”
“It only works like that in the movies. We can change whenever we want.”
“‘We’? So you’re a werewolf, too? Well, I guess that explains the lack of clothing.”
“Not wolf. Coyote.”
“Oh? Well, that’s a big difference.” She started walking again.
He got in her way again. She glared at him, seething over the effort it took to keep her gaze locked on his and not let it dip. Her mood swings threatened to swing her in that totally inappropriate direction again. Think of something else. “Okay, I’ll play along. How am I supposed to…switch?”
“First you take your clothes off.”
“That’s what I thought.” She stalked down the hillside. “That’s the sickest pickup line I’ve ever heard.”
She picked the stretch with the fewest rocks and stomped along it. She kept her glare riveted straight ahead, so she wouldn’t have to look at Cody. She could hear him trotting at her side, just out of reach. “Not a line,” he said, “just common sense. You’ll rip your clothes if you try to change in ‘em. Just thinking ahead, is all.”
“Of course,” she said frostily. “And I suppose in order to achieve this `switch’ I have to sleep with you?”
“Well, no. Never heard of it done that way.” His voice lit up. “Might be fun, though.”
“I’m calling the cops when I get home. I’m having you put away.” And maybe herself, right after.
“If that’s what makes you happy. I’m betting it won’t.” He reached for her arm. “For your own good—”
She snapped at him, a move so quick, so instinctive, she had no time to think. Her teeth clicked together just short of his fingers. She followed it up with a snarl that would have backed up a whole pack of wolves. Cody stood his ground and waited her out. The snarl died away when she realized what she’d done. Her color drained off until she was pale as the moon.
“That’s her,” Cody said softly. “The wolf. You don’t let her out, she’ll kill you. Chew you up from the inside.”
“No. I’m not. You’re not. Those things don’t exist.” She would have bolted, but Cody caught hold of her and wouldn’t let go, no matter how much she thrashed and snapped.
“Atta girl,” he encouraged. “Set her loose. I’d rather we didn’t do it like this, but like my daddy always says, any den in a twister.”
Willy ground out a curse and kicked. Her knee fell short of its target. Their legs tangled and they tumbled to the ground. She tried to scramble up, but couldn’t find her footing. Her hands and feet kept sliding all over the carpet of pine needles, and Cody. Like having four legs that refused to cooperate with a brain programmed to deal with only two.
“That’s the spirit, darlin’. Hey, is that hair on your neck?”
She aimed a punch at him, and missed. How dare he make jokes while she—oh crap. While she rolled around on the ground on top of a naked psycho. She shoved away from him and scrabbled back. “Don’t touch me. Don’t come near me.”
“You sure?” His grin infuriated her. “For our breed, this counts as foreplay.”
“You disgusting son of a—”
Coyote. Cody was gone. She blinked and he blurred. The coyote crouched in front of her, forelegs splayed and hindquarters hiked in the air. He waved his tail and yapped at her, an invitation to play.
Willy gulped, hard. I did not just see that.
The coyote lolled his tongue. Cody’s grin on canine jaws. His yellow eyes held Cody’s twinkle. He rocked back on his hindquarters and became Cody again, kneeling before her. “See that? Nothing to it. Now you try.”
I’m not going to scream. Screaming is for sissies.
She fainted instead.
~~~

This is lovely, Savanna! Many congratulations, Pat, on the release of your COYOTE MOON! It sounds fantastic!

Bestiary Parlor: The Musings of a Zoologist Turned Author said...

Congrats and welcome to the pack of shapeshifter authors. Lunar eclipse is good timing.

Lindsay, thanks for posting on the Siren-BookStrand loop!

Eva, thanks for commenting. Coming from you that is very special.

It was my pleasure to celebrate the release of a SirenBookstrand sister, Savanna.
Pat could submit it for review at CRR if she wishes.

Be happy to. Just one thing -- what's CRR? I am really new at this.

What a great cover! This book sounds really good, girls!

Pat, I don't tend to read paranormals and generally (sorry) roll my eyes at werewolves and such. But I love the interplay between these two characters and this one sounds like a fun book.