My hero is decent, intelligent, and reliable. He works hard at something useful. He builds things and people up, and doesn't tear anything down. He's kind, brave and true. 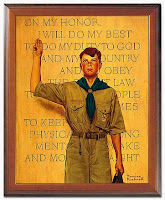 overgrown Boy Scout, he can use his fists if necessary, but usually doesn't have to. Why? Because he's so intelligent he can outsmart even the craftiest villain. "Nice guy" does not necessarily translate as "wimp".
My hero is an ordinary man, but the circumstances of his life have dragged him through the fire. This fire, which would have destroyed a lesser man, forged him into a better man, indeed, a hero.
So, here's my hero, Richard of Lady of the Stars, my Regency time travel novella. He's furious with Caroline, who appears out of nowhere one night in 1817 and literally knocks him over. Then she argues that his cottage is hers. While he plans to hand her over to the authorities come morning, he, decent man that he is, allows her to stay the night. And so, our story begins.

As for intelligent, Richard is a mathematician. He works as a teacher, so he does something useful. He's had his troubles, and he protects the heroine when harm threatens (telling you how would spoil the story).

And last but not least, because all romance is part fantasy, he's young and drop-dead gorgeous. See picture.

But all these qualities can belong to any decent man. What sets Richard apart? In the climax of the story, he faces a choice.

His heroism shines through not only by what he does for Caroline's love, but also by what he's willing to give up for it.

Lady of the Stars, available in e-book from The Wild Rose Press

Regency romance--most with humor, some with fantasy, and occasionally a paranormal

Lovely bog, Linda!
I think Richard sounds an excellent hero - I'm a huge fan of 'good' guys!
He looks great in his picture, too!

LINDA--I love nice guys. I live with one, and I wouldn't trade him for any other. In truth, there's something decidedly sensual about a nice guy, one who listens to you, helps you out, is kind and thoughtful, but always speaks his mind in an adult manner.And if he happened to look like your hero? Mmmm, well that would work. Your Richard sounds wonderful-Celia

Lovely, blog, Linda. And thank you for standing up for nice guys. We don't have enough of them-in fiction or real life-and it's always nice to see one win.

Linda - Richard sounds like a great hero! Who says nice guys have to finish last??? I love the photo - looks dreamy! *SIGH*
Thanks!!
Martha

Celia, I also have a nice guy husband. I can't imagine a hero being anything but nice.

Keena, you're right about there not being enough nice-guy heroes. I wonder why. Nasty is not attractive, and a man with too many issues is not a hero.

Hey MarthaE, nice guys always finish first in my books. I'm glad you like the picture. When I saw it, I immediately said "Richard"!

Always the nice guy for me!
Good luck with Lady of The Stars!

Hi Linda - I have another question. How did you choose his name? Are there names that to you 'feel' more heroic than others?

To be honest I'm not certain I fully get the distinction between the good guy hero and the bad boy hero, except in their polar opposite expression.
Besides, as women, we all have our preferences, as do our heroines. I'd hate to see a hero that was a fit for every woman and written as such in every romance novel.
Isn't that part of the magic of relationships, how a man and woman fit together?

Hi Mary, I know there are lots of people out there who agree with us.

Lindsay, I picked the name "Richard" because the names of English kings were popular names for boys in the Regency. The most popular male name at the time was "George" because George III was the king. But I hate the name George! As as aside, I don't think I have ever seen a Regency romance hero who's been named George.

Savanna, what I call a bad boy is a man who treats the heroine badly, but it's supposed to be all right because there will be an HEA. Lots of women excuse his behavior on the grounds that there is a core of goodness inside him. I don't buy it. I think he gets away with it precisely because these women excuse it. I won't. But as you say, to each her own.

Linda, glad you made that distinction. I don't read romance novels where the heroine is treated badly, the exception being if there's a mistaken identity situation, where the hero thinks she's a villain, something like that.

Wonderful post, Linda! I love nice guys and you know I do love your hero.

Hi Linda,
Great blog. Loved the way you introduced Richard and the picture is "sigh" perfect. Sounds like a fantastic story. Best wishes for loads of success.

Debra, nice is great all by itself, but it's even better when it comes in a gorgeous package!

Well, Savanna, I don't like a hero who abuses anyone. He can argue with someone, fight with them, but not abuse them.

Hi Rebecca, thanks for your kind words. I sighed, too, when I found that picture.

Hmmm... abuse. Interesting that came up. I was thinking along the lines of... if a hero was attacked in some way, or the woman had attacked somone he loved, and he thought he was protecting them from her.

Yes, I can see that, Savanna. My hero will defend himself and protect the heroine from anyone who might harm her, including a female villain.

The villain in "Lady of the Stars" is a woman. Richard protects Caroline from her, and makes sure the villain is punished for her misdeeds.

Linda, I completely agree that nice guy doesn't equal wimp. Sometimes it takes the stronger man to be nice when many would follow basal instincts instead.

Hi LK, exactly my take on the nice guy. And we all have TBR lists that keep getting longer and longer!

Ah, Linda, I agree. You can be 'nice' without being a wimp, and a hero who is a nice guy gets my thumbs up. A bloke can be a decent, nice guy as well as having strength of character, courage, reliability, and all the things you mentioned. Why not?! And if he looks like that photo, well - perfect!

I love nice guys, too. They're harder for me to write than the "bad boy" type though. LOL (They say to write what you know!)

Love the picture! That guy is one HUNK. Great blog post.
Cheryl