My parents were married nearly 32-years when my dad passed away. I always believed that they shared the greatest love story of all and would eventually be immortalized along with Antony and Cleopatra, Tony and Maria, Romeo and Juliet, and (my favorite) Scarlett and Rhett.

My mom was partially disabled, or maybe it was more than partially, there were no provisions or accommodations made back then. Held in my father’s arms she still glided on the dance floor as graceful as any ballerina. I often came home to the two of them dancing to my dad’s singing in our living room.

Oh, they had their fights and they were winners. My mom threw coffee cups more than once – either she never meant to hit daddy or fortunately her aim was just poor. Mommy (Reva) was a southern girl born and raised between Charleston SC and Charlotte NC, although she had lived in NY long enough to have lost most of her southern drawl, when she was angered or upset that twang was ever so pronounced. My father (Marcy) was Puerto Rican and reverted to his native tongue in frustration or when he knew it was much better for my mom not to understand what he was grumbling about.

Imagine growing up in a house with Scarlett O’Hara and Ricky Ricardo!

It was sudden and unexpected the day that my dad died. He had gone to work and was punching in his time card, telling a co-worker a joke, and holding the lunch box and thermos that my mom packed for him early every morning when he collapsed, his heart no longer beating.

I knew that my mom would be in tears when I saw her that day, I knew that the loss would be immeasurable. I remember marveling at her emotional strength as she survived the days and months ahead. During shiva, our religious mourning period, I stayed at her apartment, my husband stayed there as well for a few days. That first night as I sat in my dad’s favorite chair, you might think I dozed off, I watched as my dad entered the house to look in on my mom and told me that he would be back for her when it was her time.

A little more than a year and a half later mommy passed away. It wasn’t as unexpected as daddy and my sister and I, with our husbands, were at the hospital to say our goodbyes. As adults we had to tend to business and make arrangements, so later that day we parted for a while. My husband and I were driving down a highway with a destination in mind when he suddenly had to pull the car over – we both saw it.

There was a cloud in the horizon ahead of us with the unmistakable and actually sharp lines of a staircase… and I know my dad was standing at the top. It was there long enough for my mom to walk up and then the cloud faded.

There never was a greater love story. 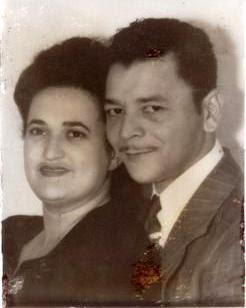 The love between my parents inspired me – it filled me with belief and hope. Their love had a lot to do with who I am and the security I feel.

All of my novels are about love and couples who come together to share passion and a future. One couple appeared in two of my books – Sylvia and Walter Hughes. Sylvia and Walter were aunt and uncle (and step-parents) to Caitlyn in Forgotten, and parents of Tom in Within the Law.

They had their “quirks” and patient understanding of each other. It was obvious they were friends and lovers. Their attitudes about love and the warmth they raised their little family with made their kids the people they were with the ability to love deeply and forever. They provided stability. Sylvia and Walter are a little like my parents, Marcy and Reva Cordero.

Dinner was chaotic. Sylvia cooked up a hearty beef stew because it was one of Tom’s favorites. Everyone sat at the round kitchen table for dinner, there was no order to their arrangement. Brandon was seated between Sylvia and Walter. Tom sat next to Walter and Caitlyn sat on Sylvia’s other side. Brandon was amazed that no matter how many different conversations were going on at the table, Sylvia managed to hear each one. And she made sure she added her opinions to each one, no matter what the topic was.

When Caitlyn asked Tom, again, if he was going to bring a date to the wedding, Sylvia added her comments. “Joyce would not have wanted you to live like this. You really should find yourself a wife.”

That was the first time that Tom hadn’t smiled for his mother’s benefit. “Ma, this subject is off limits.”

“Tommy, you are a young man.” Sylvia continued. “You should not live alone.”

“Ma... please.” Tom laid his fork down next to his plate.

“Brandon, you’re getting married. Isn’t it a nice feeling to be settling down?”

“Ma! Stop it.” Tom stood up from the table. “I’ll be back in a few minutes.” He left in a hurry. The back door slammed shut behind him.

“What? I’m not allowed to care about my kids?”

Caitlyn put her fork down on the table and leaned over to hug Sylvia. “Aunt Syl, we love you. Tommy just needs to set his own pace. It will happen. Don’t worry.”

Sylvia took Caitlyn’s face in her hands and looked at her eyes. “I just want you two to be happy. That’s all I want.”

“You hear that Brandon?” Sylvia’s voice cracked. “You better keep my baby happy.”

“Yes ma’am.” Brandon looked at Caitlyn and saw her smile at him. “I plan to work at that for the rest of my life.”

“Good. Very good.” Sylvia nodded and went back to eating.

The back door opened and Tom came back in. “Sorry everyone. I just needed some air.” He went to Sylvia and kissed her on the cheek. “I love you ma.” Before he walked around the table, Brandon saw Tom squeeze Caitlyn’s shoulder.

Walter stopped eating long enough to ask Tom how he was feeling.

“Good dad, good.” Tom sat back down in his chair and went back to eating.

And just like that, the conversations started again. And everyone ate. And Brandon learned just what family was all about.


(from Within the Law)

The last morning before his parents were leaving, Tom and his dad got up early and took the dinghy to go fishing. By the time the men got back to the house, Alli and Sylvia were in the kitchen cooking.

“I was teaching Alli how to make your favorite beef stew.” Sylvia announced proudly as Tom came into the kitchen. His mom came over to him for a hug. “She’s a keeper honey. I like her.” She spoke in a low voice for his benefit. “Alli is a real fast learner.” Sylvia praised Alli out loud.

Tom smiled when he looked at his beautiful fiancé. He knew she was already an excellent cook. He also knew that she was well on her way to being an excellent daughter-in-law. She knew how to make his mom feel special. Tom figured he was probably the luckiest guy in the world. He went to give Alli a quick kiss.

After she kissed him, Alli wrinkled her nose. “You smell like fish.”

Walter came in to greet his own woman. “At least we smell like the fish we had to throw back. They were all too small.”

“But we had fun anyway dad. Thanks for coming out today.”

Sylvia playfully pushed Walter away, but only for a moment. Then she gave him a kiss that even made Tom raise his eyebrows.

“Now don’t you go raising your eyebrows at us young man.” Sylvia chided Tom. “You expect me to accept your behavior but you also want to pretend you were some immaculate conception?”

Alli had a good laugh at Tom’s embarrassment. 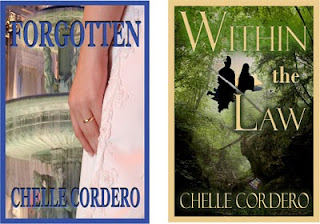 Email ThisBlogThis!Share to TwitterShare to FacebookShare to Pinterest
Labels: chelle cordero, forgotten, Marcy and Reva Cordero, Walter and Sylvia Hughes, within the law

Chelle, what a beautiful love for each other your parents shared. They are lucky, even though I know they worked at it.
That kind of love always blesses everyone in the family.

A beautiful love and love story, Chelle. As Savanna says, it's a true blessing.

Thanks Savanna and Lindsay, my sis and I both feel so blessed to have been raised with that kind of love around us. I guess that is why I am such a romantic.

Hi Kaye, it is so nice to know that the love stories we dream about can really happen in real life.

This was so beautiful, Chelle! Thank you so much for sharing this! :) As you know, I too grew up with Ricky Ricardo, we were just missing Miss Scarlett! ;)

My grandparents have been married for sixty eight years! Their love and dedication is what keeps me going.

Like you, I draw upon them for insipration, for hope and for "happily ever after." :)

I cannot tell you how much this touched me! I think I needed this today. Thanks again, hon! :)

68 years Lauren! My gosh, what a wonderful testimony to love.

Inspiring story! Thanks for sharing it and, in the process, adding a key to the frame of reference you bring to your novels.