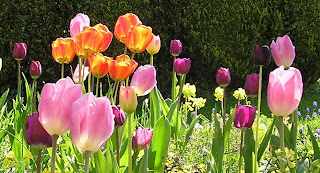 I thought I'd pop onto the pinkie to let you know my latest news.

My contemporary romantic suspense, Chasing Rachel, is being published by Bookstrand on May 11th. Set in Devon in England and Brazil, this story has its climax on Dartmoor, one of the last wilderness places in England. This book originally saw daylight as a UK hardback and sold mostly to libraries, so I've taken the opportunity to revise it for a more accessible (and much cheaper!) ebook reissue.

A four-star review of A Knight's Enchantment came in last week from the upcoming June issue of Romantic Times, and A Knight's Captive was shortlisted for the Best Historical Novel category in the Romantic Times 2009 Reviewers' Choice Awards.

And I thought the tulips were looking good yesterday a.m., too.
Posted by Lindsay Townsend at 08:00

As well as Lindsay's Book Chat (my blog) and Lindsay's Romantics (this pink blog) I've also started a new yahoo group for Historical Excerpts and Promos. If you're interested, please drop me an email.
lindsaytownsend@yahoo.co.uk

OMG, Lindsay! How great all this is! I'm glad you shared it on the pink blog. Congrats!!

(I got your email about the new group and I get back to you, thanks.

Congratulations on your upcoming release, Lindsay. May 11 is VERY SOON!

Thanks for inviting me to be a part of the pink blog.

Oh, the tulips are so amazingly beautiful... may I have a copy. I thought I'd ask before I just filch one.

Lindsay, I love hearing about all your successes! Congrats.

If I had historical excerpts I'd join your group. But, so far, I don't. Best to everyone who does.

Is it sunny up in Yorkshire?! Your tulips look like they are sunbathing, lucky things! Mine are drowning in torrential rain...

I also love hearing about all your amazing success! Congratulations on your new 4 star review, and your latest release. I do admire you, my dear :)

KAYE - thank you so much!

MAGGIE - thanks and lovely to have you here!

FRANCESCA - hope your rain-drenched tulips soon get some warming sun and give you a well-deserved, beautiful show. Thank you! Thanks for sending me the review! (If you fancy posting about your amazing reycle company on the pinkie, please do.)

Many congratulations on your 4 Star review from RT.

Also congrats on your upcoming release on 11th May. I love the cover. It conjures up Dartmoor very well.

What marvelous news Lindsay, so very excited for you! And yes, those tulips are gorgeous.

JAN - MANY THANKS! I'd love you and everyone here on the pinkie to join my new historical yahoo group, too.
I agree - Jinger has really 'caught' it for me with her latest cover!

CHELLE - my hubby is now basking in compliments - he photographed the tulips (and planted them, too.) Thanks!

LINDSAY--thanks for including us about your good news. It's astounding, if you think about it, that one group such as this has so many accomplishments, and grouped together, it a big haul!
Those tulips are gorgeous. We can't grow tulips here in Texas very well, they just melt in the heat. A gardener must take great care with them. the University of Michigan plants tulips of every color all over the campus, and when they all bloom at once,it's quite a sight. Celia

Congratulations, Lindsay! This is awesome news.

Congratulations, Lindsay. You deserve all of it!

Celia - I'm so sorry that growing tupis is tricky for you. On the other hand, you do have those glorious blue flowers!

Bekki - thanks. I love the shape of tulips.