Hostage of the Heart - Audio! 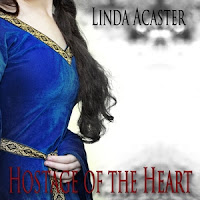 Reading time curtailed? Download an audiobook and listen while driving or catching up on the chores.
This simple piece of advice seemed to have by-passed me until last Christmas when I received three audiobooks as gifts. They became sanity-savers when faced with a 50 mile car journey each day – and I became hooked on the medium. Mind you, with one I had to be careful regarding who was in the car with me. Certainly not my mother!
Today the audio download of Hostage of the Heart is launched from Audiolark.com, and my mother approves. So will your children if you’re on the school run. It’s a ‘sweet’ romantic suspense set on the English / Welsh borders on the cusp of dramatic events in 1066.
Young Lady Dena has been taken in by her uncle, thegn of lands wrestled from the Welsh, to ensure she enters a prestigious marriage and thus gain him and his wife notice at Court. From a farming community in a flat and peaceful area of England, Dena has little understanding of the power-plays that bubble beneath the surface in this remote and rugged landscape.
But when the Welsh sweep out of the mountains, Dena becomes a battle hostage, and begins to learn the depth of treachery perpetrated on both sides. Nothing is the way of the minstrel’s songs. Who is she to trust? Her kin who swear fealty to a canon of lies and refuse to pay her ransom, or the dark-eyed Welsh knight shielding secrets of his own?
For launch week Audiolark is offering Hostage of the Heart at $3.49 (normally $9.99) for 8 hours playtime. Get it while you can!
Excerpt:
The door burst open and more men appeared, some carrying heavy pails, some pushing barrels. There was a good deal of excited chatter, and the doleful Welshmen quickly began to change their humour. Dena sank back against the wall with a sigh. The brewing-house must have been plundered. Contemptuous Welshmen were bad enough: drunken Welshmen would be unbearable.
A man came to Rhodri, spoke a few unintelligible words, and left two rawhide mugs on the table.
‘I’m told there’s not a morsel of food to be found,’ Rhodri said to her. ‘It’s shameful that Wybert does not think highly of his lord’s niece.’
Dena risked a glance in his direction, and found him grinning at her through bared teeth.
‘Ah! The lady is not dead! Sitting so still with your head bowed, your face hidden beneath that square of cloth — you look like a toadstool under a tree!’
Glowering at him, she did not rise to the goad. The man was bored and wanted a plaything. She wouldn’t give him the pleasure, or any excuse for more.
‘Your face looks pinched, my fair Lady Dena. Does the sound of my voice fill you with such dread?’
My fair Lady Dena…? What was this a trail to?
‘I have no cloak. I feel the cold,’ she replied.
‘Do you wish to sit closer to the fire?’
Dena looked down the length of the hall to the hearth where the majority of the Welshmen were taking their ease amid the open casks.
‘I prefer to remain cold.’
Rhodri chuckled, more softly than she’d expected.
‘If I were a true nobleman, I’d give you the clothes off my back. But I’m not, am I? I am Welshman – a barbarian. That’s what you call us, isn’t it? That’s what those prancing fools at Edward’s court called me – "our captive barbarian".’
Reviews for the ebook:
“…If you are looking for romance and adventure this is a good story to lose yourself in.”
“…an exciting, nail-biting tale, full of high stakes and adventure, with many twists and turns…”
Hostage of the Heart at Audiolark.com - $9.99 (launch discount: $3.49)
Ebooks: Amazon USA / Amazon UK $2.99/£2.10
Smashwords for I-Pad, Nook, mobi, etc $2.99
http://lindaacaster.blogspot.com
http://www.lindaacaster.com
http://twitter.com/#!/lindaacaster
Posted by Linda Acaster at 08:00

Thanks to LindsaysRomantics for hosting my launch blog. It's great to get back into the swing.

I'll be dropping by throughout the day to chat, so pull up a chair and grab a cuppa.

Congratulations, Linda, on the audio release of HOSTAGE OF THE HEART!

I'm downloading it now - such good value. Having read it as an ebook I'm looking forward to hearing it.

And I love that cover! Did you design the cover?

Also - 1066 is a very well-known date in British history and you've been able to give it a fresh twist. Was the research tricky to do? Most histories of this period tend to be very 'southern' based, I find.

Thanks Lindsay, and thanks for the download. Need to do one myself at this price!

The cover? Crickey, can't you tell? Of course I *didn't* do it - LOL - it's far more professional than I can manage.

As to giving the date a fresh twist, I've never been a writer who's gone for the grandstand view. I've always liked the little folks, doing their bit in the background. I guess if I were writing about Agincourt my focus would be on the ill-fated baggage boys.

Linda, congrats on your audio book. I'll bet it will be exceptionally popular.

Thanks, Savanna; you never can tell.

I think you have a story there, Linda, with the Agincourt baggage lads - maybe a tween or teen story.

Congrats on your release. Best of luck with it. I'm with you on wanting to read more about the "little people". There are so many nobles out there, I think I've overdosed.