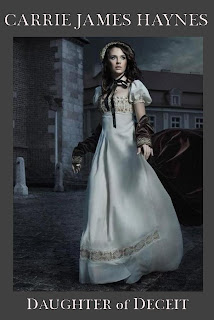 Shunned from London society for being the daughter of England’s most notorious spy, Alyce Hythe desires only to clear her father’s name. For years, she has been hidden away from all prying eyes, given a new identity and told to forget who she was. But strange things have been happening causing old rumors to once more be whispered.

Long has Lord Julian Casvelyn lived with guilt brought on when his brother was murdered by England’s most infamous traitor. But one eventful night has changed everything Lord Julian believed about his brother’s death. Never did he suspect the woman he has just saved from certain harm is the daughter of that man. Now Julian is caught in midst of a conspiracy and desire for that woman.

Thrown together by fate, the two search for answers long denied them and along the way discover a love that can free them both.

Buy 'Daughter of Deceit' at Amazon

Thankful indeed she could breathe again at least for a moment. She turned to stand by Lissa, but instead she froze upon the sight. The last person she ever expected to see this night stood in front of her.

His wide mouth curved into a vague smile which could easily turn hard she suspected. He looked quite striking, handsome and elegant in his crisp black and white evening clothes. His dark eyes darkened intensely upon her. Before she had a chance to protest, his arm gripped her elbow firmly.

“Oh, no, my dear, I think not,” his utterance carried a hard edge which startled her. “I have long tried to gain an audience with you and have been reputed one way or another. If you choose to make a scene, it will not bode well for you. You may have been hiding in the nest of the Arungdon, but I can guarantee you that legally you are still the ward of my grandfather and I…”

“Please, Lord Casvelyn, you do not have to resort to threats,” she turned her head to see if any other's attention lay upon them, but none seemed interested. Her gaze shifted back to him. “What, pray, could you have to talk to me? Charles did send his appreciation for you saving me. He assured me he had taken care of the situation and the magistrate...”

“Come. Come. Miss Rufford…or should I say Hythe. I believe there is much we could talk of.”

She glanced back over her shoulder as he edged her along beside him. “Where are you taking me? It will not be proper…”

He cut her words short. “No one will see, I can assure you. I have arranged how I can I say this a few minutes where we will not be disrupted. Then you can rush back to your lordship.”

She watched Lord Casvelyn nod to a man in front of him, a tall man tawny hair and blue eyes. The man nodded back. Immediately, she felt herself being flung into a side door, closing tightly behind her. She could only imagine why Lord Casvelyn thought it necessary to have a guard at the door.

The room was small, quaint in appearance. There was no fire lit nor candle only the moonlit shone in light. He gestured to her to sit upon a settee. She hesitated, but then complied. To her dismay he sat beside her.

She found it difficult to catch a breath with him so near. He stared at her in a manner which made her remember all too well being in his arms with his lips upon hers.

“Now will you please explain yourself so I can rejoin Charles.”

“Ah, yes, the love of your life. I have heard. Unfortunately, I tend to doubt your proclamation of feelings.”

She stared at him and he returned it. He sat close to her, too close. She scooted back but he moved, allowing only her a scant space between her and this man who made her skin shiver with just his touch. “How dare you,” she uttered under her breath. “You don’t know me. Charles and I love each other greatly…”

“Do you?” he asked in a low voice. “Are you in the habit of sharing kisses with another while in the deep throbs of love for another? Come. Do not think I have forgotten having you in my arms. Kissing you, touching you...if not interrupted, perhaps it would have lead to more than...”

She slapped him, hard, and attempted to rise. He thwarted her with his two strong hands, pulling her down to him.

“You are no gentleman!”

“Perhaps,” he answered her, but his voice softened. “Perhaps.”

His hands released her back to her seat. What did he do to her that made her act as if she had not a reasonable thought in her head?

"Tell me, Miss Hythe, what are you up to? What plan do you have? Don’t think your friend, Lord Tregilgas can save you. If I so desire, I can have you escorted out under my care.”

“You make no sense, Lord Casvelyn. You come to me with demands that I return with you. Why should I? True, Colonel Tolworthy is my guardian, but in truth I barely know him. I have been on my own for a great deal of time of my life. Why should I be a burden to him now? It is only a few months more than I will not be.”

“Listen to me carefully, my dear. I had no knowledge that you still resided within England until three weeks ago. In all I find the whole of the situation unacceptable. I’m trying to rectify this. Believe me. I believe you are in danger.”

“Answer me this. Do you know no matter if you hold your father is innocent, the world does not? No matter if your young Marques holds to you, you are walking into social damnation, fair or unfair. It will not be pleasant. How long do you think it will take for someone to figure out who you are? I would wager it will not be long. And then there is the matter of the threat upon your life?”

“You are mistaken that I am trying to run from my name. I am not. I have all my life since my father’s death faced his disgrace although I was unaware of it until I was seventeen. No one thought it necessary to inform me how my father died. All I knew was that he was dead. Not until Charles told me. He has been my only true friend, my Lord. I have only once visited my father’s grave and it was only through Charles I did so. Do you know what it is like to see your father’s grave ostracized from holy ground for they deem he committed suicide?”

“I know lost. I feel it every day. I dealt with my brother’s death knowing that the fiend that killed him also lay in the ground. But with your words you uttered to me, I find myself questioning all about my brother’s death. And with those words, I questioned the wisdom in allowing you this Season.”

As he spoke, he astonished her with his movement, transforming her back to that night, that room, that embrace. He moved closer, so close it seemed she could no longer claim air between them. His arms encircled her and pulled her face upward toward his. His touch startled her. She looked at him in surprise. She saw his intent, yet made no resistance. Wanting to protest, her body rebelled against the thought.

A gasp escaped her lips as he lowered his head to hers. His lips moved against hers, firm yet yielding. She melted into the sensation his kiss inflicted, the thrilling excitement and warmth flowing through her body. Her mind told her to resist though her body paid no attention to the warning. Instead, she responded to him. Gently he prodded her lips with his tongue to part. Slowly as if giving her time to get used to the idea, he slipped his tongue inside.

Within her a voice called to her to be sensible. He was dallying with her, no more, no less to prove his point. Yet, she ignored the voice choosing instead to surrender to the want within her and parted her lips fully to admit him. An intimacy flowed within her, so wonderful, awakening parts of her body she didn’t know were alive.

His arms tightened around her as pleasure cascaded through out her body. His kiss lingered. He didn’t stop with one. He kissed her again and again, astonishing her and evoking shivers that flowed down her body. A series of pleasurable sensations left her crying for more. He kissed her again, more aggressive, more demanding. Within her she had long lost any rational thought for he had her mesmerized.

She felt his hand move up and down her back. Her skin felt hot with his touch. His hand moved upward until it cupped her nape, caressing her. She could not believe what his meandering touch did to her. His lips descended down her chin to her neck. A cry escaped her when his lips found a sensitive spot which sent vibrations cascading through out her. Sensations she had never known yet desired. She had never been held in this way by anyone. Never had she felt so alive.

The next moment he held her head in his hands as if she was his captive. He ravished her mouth. Shock tensed through her. She could feel the need within him for her submit. Then as if reason took hold, he drew back. His eyes never left her widen eyes. He reached over and in a slow gentle motion caressed her face.

“Tell me now of this undying love you have for another,” he said demanding an answer from her.
Posted by Lindsay Townsend at 08:00

Lindsay,
Thanks so much for having me today! Just want to add that Today and Tomorrow Daughter of Deceit is Free on Amazon.
Thanks again. You're a doll!

Wonderful excerpt, Jerri, full of interest and tension. Your 'Daughter of Deciet' sounds really special - I wish you much success with it.