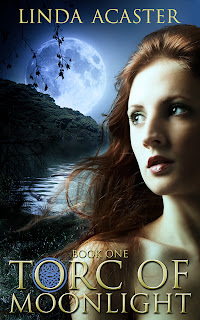 I mention that I’m writing a paranormal romance trilogy and people’s minds instinctively turn to vampires, werewolves and incubi. It’s enough to make me reach for the cross and garlic.

What many readers don’t realise is that today’s demons were yesterday’s gods, supplanted during the rise of Christianity. They were gradually demonised because the population refused to give them up.

In the Torc of Moonlight trilogy I’m writing about the resurrection of a Celtic water goddess, and not that long ago these ladies were thicker on the ground than might at first be supposed. In the UK the most prominent is Aqua Sulis, she of the golden waters of Roman Bath which are still visited by thousands of tourists every year.

Another is the spring at Walsingham, Norfolk, very much taken beneath the cloak of modern Christianity, where in 1513 Erasmus said that the waters were "efficacious in curing pains of the head and stomach." Notable to me, he also said that the shrine was surrounded by “gems, gold and silver”. A water goddess always had her hoard, from Beowulf’s mother of Grendel to King Arthur’s Lady of the Lake. After all, don’t you toss coins into pools and make a wish? So which deity is it that you think you’re invoking?

Just as with a consideration of Our Lady of Walsingham, subtexts are teased to the surface in Torc of Moonlight; not everything is as it seems.

Nick joins Alice in her quest to discover the shrine to a forgotten Celtic water goddess but Alice isn’t certain that opening her heart to him is a good idea. There have been too many coincidences in her life and none have been benign. Mesmerised by Alice, Nick is in denial - until he sees a jewelled sword fade in his hand and knows that he, or the thing that shadows him, has held it, and bloodied it, long ago. To tell Alice will make her flee him; to do nothing could kill her. Is his love strong enough to defend her against a force he doesn't understand? 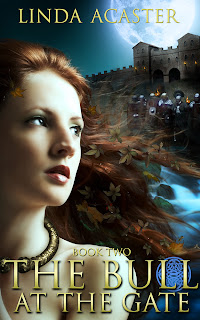 As the unnamed goddess resurrects throughout the trilogy, she drags along the ghosts of previous eras. In The Bull At The Gate, Nick and Alice are in York, a city with history cramped within its mediaeval fortifications stretching back to the Roman legions, and where deep in modern cellars sacrificial victims strive for the light.

Very interesting and intriguing post by someone who clearly knows her stuff!

Thanks for dropping by, Angie. Glad you found it intriguing.

Hear, hear, LindaA! My forthcoming novel, 'Dark Maiden' has paranormal elements in it - paranormal as believed by people in the Middle Ages.

The water goddesses and old gods are deep in our history. I found your 'Torc of Moonlight' compelling and fascinating by the way you drew on this rich, dark past.

I love the covers!

Can't wait for 'The Bull at the Gate'!

Thanks, Lindsay. The research was fascinating, and so close to home that it started giving me the shivers. There is so much we pass every day without realising how deep run its roots.

I'm hoping the now launched paperback will gather the novel so new readers. Back on with book 2!

I'm sure I'm not the only one who is sick of vampires and werewolves. There are enough of those books out there to turn people off paranormal. Nice to see you have a different slant. And the covers are great.

I know what you mean, Linda, but there's room for everyone. Some just shout louder than others.

I do intend to write about a werewolf, or should I say ulfhednar. Like Lindsay, above, I believe in giving my supernatural a very large dose of historical reality.

Thanks for dropping by.

Hi Linda, thanks for sharing this rich paranormal history... so much has been lost to a lot of us. I love learning about the ancient Celtic goddesses.

I guess readers do associate mostly vampires and werewolves with the paranormal genre.

While my latest shapeshifter romance novel -- in the editing stage currently -- does include secondary werewolf and supernatural characters, including an Egyptian Goddess, from our shapeshifter-landia town of Talbot's Peak, Montana... and the heroes are a wolf and cougar shifter... the story features shamanic experiences, and is not merely a lighthearted tale or a dark tale of what is typically considered paranormal.

Your cover art is gorgeous! I wish you every authorly success.

Hi Savanna, thanks for dropping by.

I just get a kick out of thinking of a shape-shifter town in Montana! It's the same sensory misalignment with Torc of Moonlight. Yes, Yorkshire has some seriously atmospheric scenery... but the industrial/fishing city of Hull? Yet history connects if we look beneath the surface. At school we were told that the city is young (ie established early mediaeval) yet on the outskirts have been found Bronze age boats, the biggest 50 feet long which is reckoned could take 18 paddlers. That's some serious Pre-Roman kit.

I think readers perceptions of the paranormal have been fed by Hollywood for effect - Nosferatu was not a mesmerising guy - yet there have always been 'shape-changers' as a mindset, mostly for religious purposes. You only need look at the Native American peoples.

What I think we writers need to do is fictionalise by all means, it is, after all our trade, but keep within the shadow of the historical context (or what we know of it) otherwise the history is lost. After all, there are plenty of people who dismiss the Holocaust as exaggeration, and that's only 70 years old.

Linda, I agree. Fictionalizing history is crucial, I believe. Because so much of it has been forgotten or sanitized, or covered up.

For example, throughout history here, there are accounts of giants by American Indian tribes, and there have been all sorts of graves discovered with remains of giants. Yet, every effort is being made to keep this a secret. You can find info at ~stevequayle.com~ and that's only one site with real documents.

Fascinating about the 'bronze age' artifacts. But then, Britain is filled with remnants of the most ancient history, recorded and not recorded.

My specialty is antediluvian history in my books, which of course, is still in the paranormal realm.

Did you know Tolkien's high fantasy novels were based on reality not myths, on ancient documents he found, then fictionalized. It was known as the third age.

Our real history is far, far more than what has been revealed.

The paranormal is fertile ground for exploring human frailties and strengths. Depending on the slant, one person's myth is another's legend is another's history is another's bunk.

Once again, an interesting piece that demonstrates how thorough you are in your research. Fascinating stuff, thanks.

You're welcome, Stuart, and thanks.