"A Marriage Made in Hell"/"A Wish Under a Yuletide Moon". 2 novellas in ONE YULETIDE KNIGHT 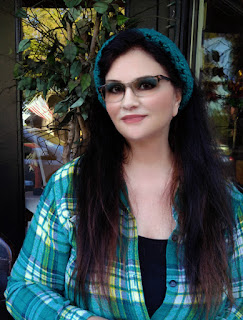 Essence of the game is deception...

When her half-sister refuses to marry the powerful earl of Hellborne, Greyson de Verre, Lesslyn de Sancerre sees the chance to have a life, a home and a husband of her own, so she agrees to take her sister's place.  Her sister, in turn, is off to elope with the man she has fallen in love with.  Everything appears fated in this pact the two women seal.  What seemed like a logical solution at the time soon becomes a battle to keep ahead of the lies.  Lesslyn quickly learns plots and schemes are easily concocted, but realities arising from the falsehoods are a different matter altogether.  Especially, when she is quickly falling in love with Greyson de Verre...her husband to be.
Commanded to wed by royal decree...

When Edward Plantagenet demands you must marry, you have little options...or do you?  King Edward has commanded that the earl of Hellborne must marry the heiress of Sancerre.  After all a bargain is a bargain—even if the earl views the coming marriage with disdain.  Only, the enigmatic lord of Hellborne needs must wed on Yuletide...so wed he shall...no matter what.
Even if it is a Marriage Made in Hell. . .

Lesslyn stared, her eyes traveling up the long, strong thighs, encased in soft leathern hose, exposed since he wore no surcoat.  The short black habergeon only came to his narrow hips.  Growing lightheaded, the whole incident was taking on a bizarre dream quality.  She tried to swallow, as she stared up at his muscular legs.  If it were a fantasy, then it must be one born of her darkest desires.  How ironic to meet her bridegroom in such a fashion.
He leaned down and locked his hands behind the small of her back.  “Can you link your arms around my neck?”
She was too weak to nod again, instead, she just did as he asked.
He lifted her, until Lesslyn was on her feet––and pressed up against him!  Her body was flush against his very masculine frame; heat off him rolled over her in a wave.  So flooded with the sense of this man, her heart slammed against her ribs.  The unusual, luring scent of his skin was surprisingly intoxicating.  Lesslyn leaned into him, reveling in the tantalizing fragrance.
“Your breath will come.  Trust me.”  His head dipped closer so he could whisper in her ear.  “You might pass out.  Never fear, I shall catch you and keep you safe.”
Lesslyn felt faint, her legs rubbery.  She started to sway.  Suddenly, air returned and she could draw breath again.  Still dizzy, her legs buckled, but as he promised he caught her and held her close.
“See, I told two truths.  Your breath came back and I did not allow you to fall.”  He gave a grin that nearly stopped her heart.
Lesslyn wheezed, her throat still burning.
“Breathe slowly.  Keep your breaths shallow.  Soon, all will be normal.”
Lesslyn tried to offer him a reassuring smile, but her body was focused on blessed air.  She had never understood the necessary function, or how something so natural could be taken from you.  Instead, she gave him a small nod, and lowered her eyes, unable to meet his penetrating stare.
The fear was subsiding, only to be replaced by other powerful emotions.  She was aware of this man, on a level that had never touched her before.  Aware she was offering him a life of lies.  It made her ashamed.
He kissed her cheek, ever so faintly, the touch so light she could almost believe she imagined it.  The moment was spoiled as a chunk of snow fell high from the tree, hitting them both.  Hellborne laughed.  It was a deep, rumbling sound that suddenly made her feel happy.
His eyes narrowed and he tilted her head back, his brow flexing into a frown as he checked her forehead.  His thumb faintly brushed over the sore spot.  “You grow a lump.  Did he hit you?”  He turned his head, watching as they led the man past.  If eyes had the power to kill, the enemy warrior would drop to his death on the spot.
She swallowed hard to push words out.  “Nay...horse...knocked me off.”
The attacker looked worried.  “I was no’ goin’ to harm her.  Wanted the beast, ’tis all...to get away...she stabbed me, she did.”  He raised his bleeding lower arm to show the wound.
“Not harm her?  You forget I blocked your swing as you stood over her.  She was knocked breathless, unable to move.  What?  You lifted your sword against a woman who was flat on her back?”  Fury rode on every word Hellborne spoke.
One of the knights guarding the man held up the knife.  “Your lady is a fighter, I’d say.”
Greyson stepped away from her, though he kept his left hand on her back.  “Knave, want to save your life?  Tell me under whose banner you fought?  Why did you attack this party?”
The man glanced from Hellborne, then to Lesslyn, and then back, buying time before he answered.  Resignation finally lit his eyes.  “No banner, my lord.  We were paid coin—I know not who.  I canno’ give you a name even if I wanted to.”
“What were your orders?
“Just to attack the party and take the woman,” he replied.  At the darkening of Hellborne’s face, he quickly tacked on.  “The command was no’ to harm a hair on her head.  Just take her.”
Hellborne barked, “Take her where?”
“Again, I know not.”
Hellborne held out his right hand for his sword, and his squire quickly passed it to him. 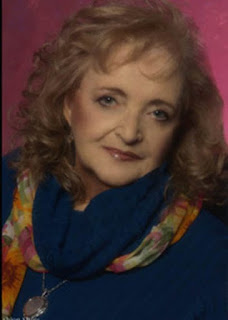 Dawn Thompson is another author in the ONE YULETIDE KNIGHT anthology with her novella, "A Wish Under a Yuletide Moon."

Here is a blurb for Dawn, and an Excerpt.

It was under the cold Yuletide moon when Garlon Trivelyan, Knight of the Realm, heard the sirens keen—just before the ship hit Land’s End shoals.  As the galley broke apart, he felt something keeping him afloat in the icy waters, nudging him toward shore.  He suddenly found himself on the beach, his arm deeply wounded.  His blood black under the silver moonlight.  Garlon knew he was dying so he made a wish to live, never remotely believing that final request could be answered.  Too late he recalled the warning: be careful for what you wish.
Annalee, the goddess of the wishing well, heard the mortal’s plea—and answered it.  Now Garlon Trevilyan was trapped in the land of the Fae on the night of Yule, where magic could save a dying man’s life.  But at what price?

Dawn Thompson weaves a spell of wishes granted and the dark consequences of myths and legends, of Auld Gods, Centaurs, Selkies and the strongest power of all—Love.

“I...I...”  Garlon could scarcely form words.  “Who are you?”
“You may call me Analee.  You called upon the goddess Annis, and I answered.  I am the handmaiden of this well.”
Suddenly, the pain in his arm ceased.  Mayhap he was dreaming?
“If the full moon waxes at Yuletide, I am permitted to rise from the pool and take a lover—if he pays the proper tribute.  You gifted me with a sigil ring of gold.  I accept this.”
Surely, this was naught but a night visitation.  Or he had died in the wreck, and this was his torment.  She leaned to him and brushed her cool lips across his.  Strangely, it didn’t feel like a dream.  He could taste the moisture from her mouth.  He hungered for more, desire suddenly roaring through his blood with fire.
“Have I died, then?” he finally asked.
“Nay, I have healed your arm.  You shall live Garlon Trivelyan,” she said
“How do you know my name?”
“I know much, Knight of the Realm,” she returned.  “I have healed you, saved your life.  I have chosen you.  Only, you must come to me of your free will.  I will not compel you to be my lover.”
Overhead, the Yuletide moon peeked out from behind the clouds, the silvery beams almost clinging to her womanly perfection.
As dreams go, this one was surely born of his deepest desires.  Never had he seen a woman so beautiful.
“Arise, Sir Knight,” she said, holding out her hand to him. 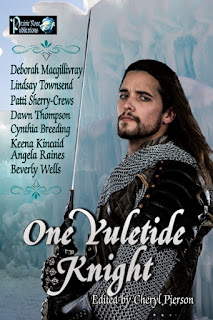 Posted by Lindsay Townsend at 18:47

Hi, Lindsay and Deborah. I love a story where the heroine falls in love with her husband--against her expectations! I'm still waiting for my copy of One Yuletide Knight but now I'll be checking the post more frequently after reading your blurbs and excerpts. Both these stories look delicious! I want to sit down in front of the fire with hot chocolate and dive into them (I wish we had a fireplace though).

Thanks, Patti. I loved this one, where two people never thought to marry are pushed into a marriage by their siblings and it turns out magical. As this Christmas season approaches, it seems a lot of troubled times ahead. I just wanted to give the reader a place to get away from it all and enjoy the magic of this time of year and the possibilities of love. I am a true romantic on all levels.

I want to thank Lindsey for showcasing my story and Dawns, and thrilled to be in the anthology with her and the other wonderful PRP authors.

Oh, how I loved every single story in this anthology! Deborah, you know how I love the Challons and everything connected to them. :)))I am so glad to know that this is the beginning of a new "era" of a new series of knights and their ladies. Enjoyed Dawn's story so much, too--one of those "magical" tales that kept me turning the pages from beginning to end.

Lindsay, you know I loved your tale, too, as always. Your characters always make me feel as if I'm right there with them, experiencing their ups and downs. I think PRP is so fortunate to have you as well as these other authors to write your exciting, emotional stories that take the reader on a vicarious adventure and breathe a huge sigh of contentment when we come to the end of the tale!

Thank you, Cheryl! The Dragons are near to my heart, so I am sleeping so nice to know they have the best home ever! And Candy and I appreciate being able to get Dawn's story out for her fans.

Both stories sound marvelous. And on sale from Prairie Rose Publications? Can't beat that. Best of luck!!!

I am always amazed at the stories one creates and how they are all wonderful, yet so different. Reading through the anthology now. Doris

Many thanks for your kind feedback, Doris, Tracy, Deborah, Patti and Cheryl! I love being part of Prairie Rose Publications, you are such a talented and supportive group!

I loved both of these stories in the anthology. I only wish there as more of these fabulous heroines.