LILLIAN AND THE ITALIANS - Mystery and Romance by David Gee 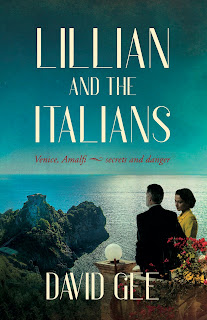 Looking for her wayward son in 1960s Italy, an English widow encounters revelations and begins a dangerous romance.
In Venice Lillian Rutherford meets the ex-gigolo who has shared the last four years of Andrew’s life; his disclosures force her to confront a side of her son that she never suspected. Going on to Amalfi, she meets the charismatic Prince Massimo Monfalcone, whose playboy son is being held to ransom in Corsica with Andrew. Massimo distracts Lillian with his life story: his first wife was murdered in a Sicilian blood-feud; his second wife killed herself because of his infidelity. As they wait for news of their sons, a bond grows between Lillian and the Prince...
Excerpt

Extract from LILLIAN AND THE ITALIANS by DAVID GEE

Venice 1966. Lillian Rutherford is dining on the island of Torcello with Carlo Marini, the ex-gigolo who has shared the last four years of her son Andrew’s life.

Lillian declined a dessert or a liqueur. She drank a cup of black coffee while Carlo ate a chunk of stale-looking local cheese and served himself from a bottle of grappa which the wine-steward left on the table.

She was sure there was more – much more – to be told. ‘You said something earlier about a scandal two years ago,’ she reminded him; ‘and some people leaving under a cloud. Was Andrew involved with these people?’

‘Well, yes, he was,’ Carlo admitted. ‘Except that he didn’t really get into that set until the year they left. For our first year we were busy just trying to make ends meet, although right from the start Andrew was sniffing out the local scene to see who was worth getting to know.’

‘But why did these people leave?’ Lillian persisted.

Carlo paused for a moment, sipping his grappa, before embarking on a description of what he called ‘the moral climate of Venice’. In spite of all the nobility and the artists and the Jet Set visitors it remained, he said, a small and gossipy community, very provincial: ‘a lot like Hastings, according to Andrew!’ Lillian laughed at this improbable comparison. Every season produced its crop of scenes and scandals, he went on, and certain families were known to have outrageous skeletons in their closets; but for the most part the residents led circumspect lives in a town where it was impossible to keep anything secret for long.

In recent years a number of very rich new immigrants had settled in the city, buying and restoring apartments and palaces, entertaining and befriending the local nobility and expatriate artists. During the summer of 1964, one of these newcomers had exceeded the relatively elastic bounds of propriety by insulting the wife of the chief-of-police on the beach at Lido. The incident triggered a strong reaction from the normally easy-going questura.

The first victim of the ensuing ‘purge’ was not the man who had offended the questore’s wife but an art-dealer from London who, despite the intercessions of influential friends, was expelled from the country. He was put on a train to Paris where, within days, he committed suicide. Others were similarly ejected or had their residency permits revoked. A few more chose flight as the wisest course, resulting in a minor exodus in the autumn of 1964.

‘And was Andrew involved in this “exodus”?’ Lillian asked.

‘It was about then that we moved to Burano,’ said Carlo. ‘Although this really had nothing to do with it.’

‘But why did they leave?’ she enquired again. ‘This poor man who killed himself, what was he guilty of?’

Carlo poured himself another grappa. ‘Well, the questore – chief-of-police – was a strange and vindictive man, a Sicilian. He had a few bees in his bonnet: Communists –’ he shrugged – ‘and one or two other things.’

She gave a derisive laugh. ‘Come now, Sharlz – I’m sorry – Carlo – I know I’m just a country bumpkin, but you can’t expect me to believe that people who could afford to restore palaces were Communist sympathizers.’

Carlo drained his glass at a single draught. He looked straight at her.

‘They were homosexuals,’ he said.

A waiter refilled Lillian’s coffee-cup. She picked it up with fingers that suddenly trembled. ‘Are you trying to tell me that my son is a homosexual?’ She pronounced the word in the popular English manner, with a long first ‘o’: Homer-sexual.